“She’s allergic to what?” I stared down at my two-year-old daughter. The swelling red bumps in corn rows spotted down her tiny back. “So what can she eat?”

Dr. Gordon was a staunch and strict allergist, who in her mid-seventies presided with totalitarian rule. However, she was the best, and I needed the best for my child who had lately been more sick  than well. It was then Dr. Gordon handed me a thick stack of papers.

“Read this, no, study it! Get rid of the cats and dog. Cover all her bedding, spray all surfaces with the allergex spray, and don’t, I said, DON’T feed her anything with milk, corn, chocolate . . .”

The list went on. Still bumfuzzled, I was ushered out of her office with my tiny tot, my hungry tiny tot, and I didn’t have a clue what to feed her.

So I read, I studied, and I searched the aisles of the grocery stores.

“Did you know that corn syrup or some form of corn or milk is in almost every packaged meal in the grocery store?” I reported to my husband that night.

With nothing to go by, the following Saturday I headed off to our local library where my adventure began. Funny, isn’t it, that even though my mother had a degree in teaching Home Economics, I had grown up not learning how to cook one thing or realizing the real staples for nutrition.

After I was married, I taught myself how to cook truly scrumptious meals amidst just as many death-defying disasters. However, the luscious favorites like double-stuffed butterflied pork chops unknowingly were double stuffing our stomachs and arteries.

That was thirty-five years ago when we served iceberg lettuce soaked in 1000 Island dressing and called it healthy. No one was talking about sound nutrition, unless, of course, they were fanatics.

Well, guess who became a fanatic?

“Did you know that those antibiotics for Ari’s ear infections are stripping away the good with the bad bacteria?” I spouted, ending with my practiced pronunciation of Lactobacillus Acidophilus.

Yes, it was through much research I discovered how to replace the good flora and the vital nutrients her body needed. I also in turn learned how to cook and prepare healthy meals, real food from scratch. Thus, my daughter’s health improved and so did mine.

I will say Ari still reminisces about being the only kid who opened up her lunch pail and all the kids squealed, “EEEW!” because of her stinky soy milk to drink with her carob-honey brownie.

Now, I’m not as radical as I was, more 70:30 in my healthy/junkfood ratio. But through something so grueling as a sick toddler allergic to everything, I learned many things of lifelong benefit. In turn, I never use the word “diet” as in depriving myself of food because I’ve learned what balances my life and body  (like a few healthy meals justify chocolate-covered cake donuts).

So thank you, sickness, for teaching me a lifestyle and habits that have influenced me and others. 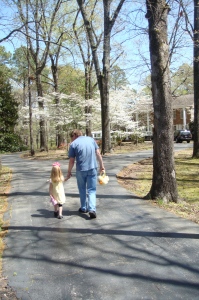 Going forward with the Father’s help.

Funny, how in hindsight we can look back and laugh about most of those awful parts of our lives,  that is if something good resulted, eventually. It’s times like these we become more teachable, more malleable, don’t we? And if we choose a more optimistic approach, we can consider each obstacle a challenge to overcome.

For it was during my early trials, I not only developed culinary skills and sound nutrition,  I also learned how to stretch a penny. (Yes, I realize some people have dollars to stretch, we only had pennies.)

It was right after I was married back in the 70s that my husband was hospitalized for an illness. Then I caught it and was hospitalized. Guess how much our hospitalization insurance paid? That would be none because we hadn’t gotten around to that yet. So while we were paying as much as we could each month, I became pregnant, adding more to our never-ending medical bills.

Yet, it was during those years, I learned that if I didn’t buy anything–clothes, furniture, trinkets, I’d have more to pay on our bills. Shopping the three nearby grocery stores with the best sales and coupons became a game. While other young couples were dressing in the latest fashions and filling their new houses with matching furniture, I creatively found simple pleasures in our rundown rent house with hand-me-down furniture.

I don’t remember feeling deprived, for those were rich years with a growing baby and future before me. And it was during that time, that sadly, many of those young couples who were now bogged down in debt with their new house and furniture also divorced. So, thank you, debt, for teaching me how to be grounded and discover my riches aren’t in being enslaved to material objects.

Life lessons continued. When I was unable to have more children, I was impregnated with faith, getting to adopt Matt years later. (Shared in Daytime Dreams.)

When my 18-year marriage ended in a divorce, I learned what single parents do: recover and go faithfully forward. (Shared in Rule Book Changes.) When I chose to go back to college and earned a graduate degree favorable teaching positions followed.

Instead of failure, I discovered quadrupled blessings when in my forties I met and married the love of my life, doubling my children from two to four. So ugly turned beautiful.

When Fyodor Dostoevsky proclaims, “I have a most brilliant future before me,” I ask how he knew what his future held–a prison term, an almost execution, time served in Siberia–even as I wholeheartedly agree with his thought.  I’ve witnessed my future becoming brilliant by having to overcome obstacles, making it a challenge to create imaginative solutions for each one.

On the contrary, Dostoevsky realistically states, “Man is a pliable animal, a being who gets accustomed to everything.” I have been that animal, adjusting to situations and making them, good or bad, a continual journey to something. Yet, what is that something?

It’s in our looking forward without regrets that we can greet each day with a childlike hope, unlimited expectations, and a

Singing in the rain!

determination to obtain our intended goals.

Best of all, it is in our faith, hope and love, and kindness and gentleness, patience and meekness and self-control (Galatians 5) that we strengthen in our resolve.

May I mention sometimes it takes longer than we planned. Yet, how else will we create a richer life, a deeper life.

It was during my obstacles that I clung to the Lord for His brilliance and found my future.

Learn a bit about the Book of Kells in ART LESSONS for LIFE.